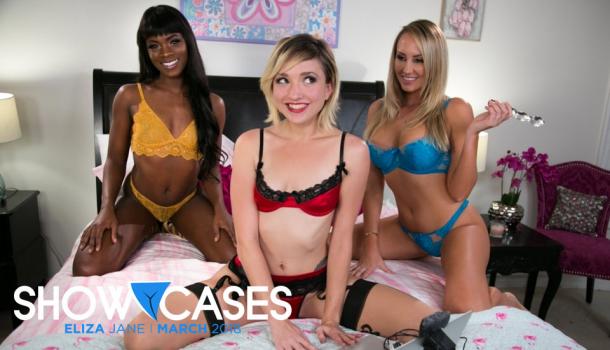 Eliza Jane isn’t having the best day. She’s trying to webcam but her viewers are complaining about what she’s wearing and how her show is boring. She tries to plead with her audience and while she’s doing this, her internet goes down. Desperate and frustrated she wishes that a fairy godmother could come and rescue her. When Brett Rossi, her fairy cam mother appears, Eliza can’t believe her eyes. Brett explains that she has 3 wishes and that she shouldn’t squander them. Eliza needs her internet back up and when Brett counts to 3 and yells the magic word her internet is back up and running. While Eliza contemplates what she should wish for next. Brett looks at her room and tells her it might be time for some redecorating. As she says the magic works the room changes and Eliza couldn’t be happier. Brett remarks that the outfit Eliza is wearing is awful and at the flick of the wand Eliza gets a makeover that makes her look hot as fuck. When Eliza’s viewers spot Brett they ask the girls if they can cam together. It doesn’t take much for Eliza to convince Brett to dyke it out with her. When the girls finish their show, Brett tells Eliza that she needs to leave but Eliza pleads with her not to. She’s never had this much success at camming at needs a girl to dyke it out with. Brett tells her she’s really pushing her luck but says she will grant her one more wish before she goes. She’s gonna send her another girl, and by the flick of a wand, Anna Foxx appears. Anna is perplexed at what she’s doing there but when Brett tells her to attend to all of Eliza’s needs, she does so with pleasure.