Ariane Saint-Amour’s skintight dress clings to her super-slim, super-busty body like it’s Spandex. Ariane talks about how nice it feels on her. She wears glasses often in her own shoots but has never worn eyeglasses before in her SCORELAND scenes. They add an extra touch of sexy. We’ll back that statement up with science. The Swiss Journal of Psychology released a study in 2011 that claims that people who wear glasses are seen as more attractive, confident and friendlier, dismantling the geek stereotype. Ariane clears her desk to make space so she can get busy. At the half-way mark, Ariane gives herself a hand under-the-desk while her other hand plays with her boobs. “I masturbate alone, in duos, and in groups. Toys or no toys.

END_OF_DOCUMENT_TOKEN_TO_BE_REPLACED

Super-slim, super-stacked Quebecoise Ariane Saint-Amour talks about her background, her tattoos, piercings, bras, cosplay and more in the opener of this scene. She lives in Montreal and calls herself a vampire because she sleeps during the day and is awake all night. (Note the fangs.) She owns three cats and jokes that she’s a “crazy cat lady.” Ariane likes to work out when she gets up (and her body is proof that she’s successful at it). She does her stationery bike, usually in a tank top and panties. After that, she checks out her social media accounts and does her shoots. Ariane’s interest in cosplay began by attending Comic Con. Today, she’s considered one of the world’s leading models in cosplay, fetish and Latex wear. We’ve seen photos of Ariane as Lady Deadpool. Her costumes are Hollywood studio-level quality. After her chat, Ariane tries on tight tops (some tits ‘n’ ass slow motion is added) then she gives her boobs and pussy some pleasuring.

END_OF_DOCUMENT_TOKEN_TO_BE_REPLACED 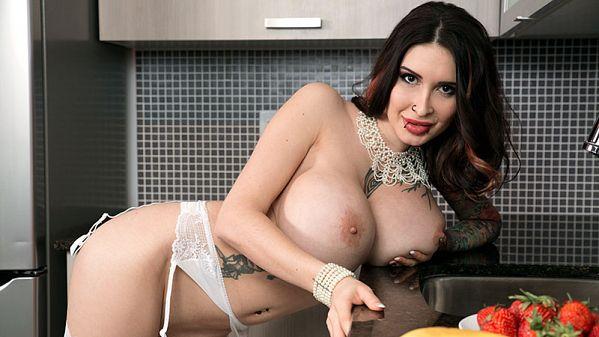 Meanwhile, over in Montreal, super-busty French-Canadian star Ariane Saint-Amour is in the kitchen to teach us some French words, using bananas, strawberries and grapes as visual aids. Ariane’s sexy Quebecoise accent is killer. Wearing an apron over a skin-tight dress, the ever-sensuous Ariane tells us the French word for each fruit. The banana gets a lot of attention with her hands and especially her mouth. There are no banana eating contests in Montreal clubs. Ariane would win every one if there were. After taking off her dress, bra and panties, Ariane adds a chocolate ice cream bar to her fruit show. She has a special way with strawberries too. Playing with her enormous tits and spreading her pussy lips, Ariane really knows how to make kitchen magic. .