Sara (Bree Daniels) is worried about her roommate Cynthia (Cadence Lux), who barely seems to leave their room anymore. She confronts her and asks if she needs help. Cynthia, admits to struggling with her mental health, but also having anxiety about her sexuality: she’s a lesbian and is afraid of not being accepted in the sorority if they find out. Sara tells Cynthia that she’s a lesbian too, and the two confess their love for each other.

END_OF_DOCUMENT_TOKEN_TO_BE_REPLACED 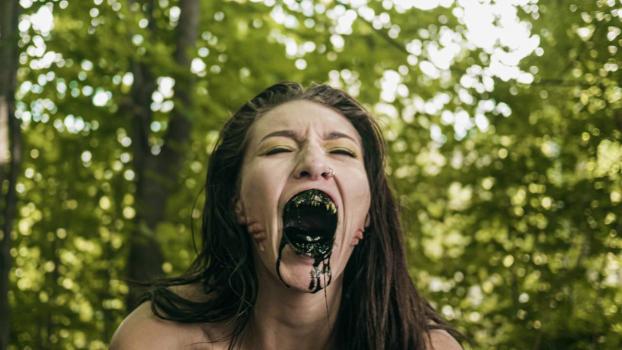 Bree Daniels And Bella Rolland – The Thing From The Lake
Released: October 24, 2019

‘I cannot think of the deep sea without shuddering at the nameless things that may at this very moment be crawling and floundering on its slimy bed…’
-H.P. Lovecraft

THE THING IN THE LAKE
While Investigating Unknown Phenomenon At A Lake, Scientist Encounters Enigmatic Woman

SCENE OPENS ON Rita (Bree Daniels). A scientist, she is in the field collecting samples, looking for an explanation for a mysterious phenomenon that is making the vegetation around a lake decompose from within.

Determined to get to the bottom of the situation, Rita resolves to get some more samples from an area near the lake.

As Rita investigates further, she notices a fungus she recognizes. But there’s something odd about this particular specimen. She takes a sample, but as she is putting it away, she accidentally drops some of the sample on herself which causes an instantaneous effect on Rita. She sways on her feet.

Rita watches, entranced. Becoming aroused herself, she begins to rub her pussy.

Suddenly, from the brush by the lake, a mysterious woman (Bella Rolland) emerges, advancing towards the man. Getting a closer look at the woman, Rita’s eyes widen. The woman has gills. Wordlessly the woman bends down between the man’s legs and puts his cock into her mouth. He’s shocked but doesn’t resist.

The woman is wild, almost feral as she attacks his cock, climbing on top and riding him. Rita watches, fixated on this spectacle as she rubs her pussy.

END_OF_DOCUMENT_TOKEN_TO_BE_REPLACED

Mimi (Kenna James) is sent to a women’s reform school run by an evil warden, Dominique (Reagan Foxx), and her henchwoman, Miss Patty (Serene Siren). Mimi is placed in a room with Heather (Bree Daniels), a shy and quiet girl. Mimi begins to notice a lot of strange things going on in the reform school, and nothing will stop her from investigating. Not even Maria (Cadence Lux), the school bully, who notices her strange behavior. With the help of Trisha (Charlotte Stokely), a detective who’s looking for a missing girl, Mimi will do what it takes to get out of the reform school and find out what’s really going on behind these walls.

END_OF_DOCUMENT_TOKEN_TO_BE_REPLACED

Bree Daniels And Kenna James – Just The Two Of Us
Released: September 12, 2019

During the next few days, Mimi (Kenna James) and Heather (Bree Daniels) are getting closer. The lonely and shy Heather slowly opens up to her new friends and these feeling starts to attract the attention of Miss Patty (Serene Siren) and Marie (Cadence Lux). That doesn’t stop Heather. One night after the curfew, Heather sneaks into Mimi’s bed. The two girls look at each other for few seconds before Heather kisses her. Mimi answers back with a gentle kiss. Slowly the two girls undress each other and enjoy each other’s company. For the brief moment, they forget everything surrounding them, the only thing that matters now; it’s the pleasure of each other.

END_OF_DOCUMENT_TOKEN_TO_BE_REPLACED 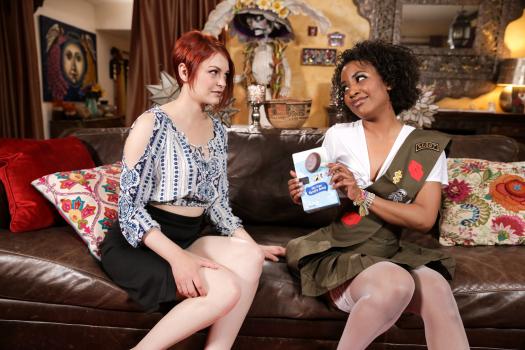 Bree Daniels is lounging on the couch, looking a bit anxious and excited, as though she’s waiting for something. There is a knock on the door. Bree instantly jumps to her feet and smooths out her clothes, then speedwalks to the door. ‘Well, who could that be at the door?’ she says in a very exaggerated tone. Bree opens the door and has an expression of mixed arousal and surprise as she sees Demi Sutra, who is wearing a sexy scout uniform and holding a box of cookies.

Bree tries to start to speak but instead bursts out laughing. ‘Do you have any idea how hard it was to find this outfit? I felt so awkward as a full-grown adult in her twenties asking the store owner for a ‘Sexy Scout Costume’, I don’t even think they make real ones in adult sizes!’ a frustrated Demi says.

‘Oh shush! Stay in character, you promised!’ Bree says. ‘Okay, okay, sorry! ‘Gee, thanks for inviting me into your home, ma’am!’ Demi responds. Bree taps Demi’s butt to scoot her inside and closes the door.

Bree invites Demi deeper inside the house and follows her in while ogling her from behind. Once they reach the living room, Demi smiles and spins around, innocently asking if she’d like to buy some cookies.

‘No, SEXIER,’ Bree playfully insists. Demi looks a bit embarrassed but then changes her voice to be sexier and asks again if Bree would like to buy some cookies. It’s for a great cause — the troop needs to buy even SHORTER skirts…

Bree is turned on, leaning in for a kiss while saying that with the right incentive, Bree might even consider buying out her whole supply!

Demi giggles, getting embarrassed and avoiding the kiss. She admits that she feels a bit weird doing this… is this REALLY her number one fantasy? Bree pouts that if Demi was in scouts growing up like she was, she’d understand. Surrounded by all those girls her age, just only starting to learn about her body, still not even knowing what a lesbian was yet let alone that she was one… scouts was the beginning of her sexual awakening! It’s her ultimate fantasy from her youth that she still thinks about now in her twenties!

Demi seems more reassured and says that makes so much sense, and makes her feel way better – definitely a less creepy way of thinking of it, for sure! Bree smirks and says they should keep going so that they don’t break the mood!

END_OF_DOCUMENT_TOKEN_TO_BE_REPLACED

When Bree arrives at her hotel, she finds some sexy underwear sent from her man just for the evening – but she won’t be spending it with him. He has arranged for her company for the evening, and will be expecting every dirty detail when the night is over.

END_OF_DOCUMENT_TOKEN_TO_BE_REPLACED

I’ve been following this cam girl , Bree Daniels, for a while now. She finally decided to see some of her fans in real life and I was one of the lucky few who gets to have her for the night. Let’s hope she likes it rough because that’s exactly how I’m going to give it to her tonight.

END_OF_DOCUMENT_TOKEN_TO_BE_REPLACED

Fiery redhead Bree is loving taking in the city sights and flirts shamelessly for you as she does so. But this beauty has more than a nightcap in mind when she retires to her hotel room.